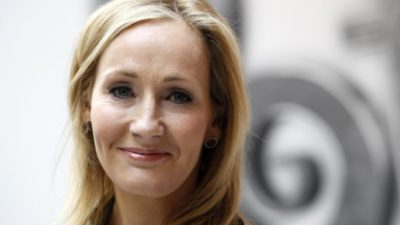 Rowling has said that her teenage years were unhappy. Her mum had MS and she had a strained relationship with her father.

She is still said not to be on speaking terms with him.

Her first secondary school English teacher, remembers her as “not exceptional” but “quite good at English”. Rowling got two A’s and a B in her A-Levels (Final School Exams)

She applied and was rejected from Oxford and completed a French & Classics degree at Exeter University.

After graduating she worked as a researcher and bilingual secretary for Amnesty International in London. She then got a job in the Manchester Chamber of Commerce.

In 1990, while she was on a four-hour-delayed train trip from Manchester to London, the idea for a story of a young boy attending a school of wizardry “came fully formed” into her mind.

Seven years after graduating from university, Rowling saw herself as a failure. Her marriage had failed she had no job and was diagnosed with clinical depression.

She signed up for welfare benefits describing her economic status as being:

“poor as it is possible to be in modern Britain, without being homeless”

When she finally finished her first book, it was submitted to twelve publishing houses, all of which rejected the manuscript. It was eventually published by Bloomsbury, a publishing house in London.

This was due to Alice Newton, the eight-year-old daughter of Bloomsbury’s chairman, who was given the first chapter to review by her father and immediately demanded more.

Cunningham told Rowling that she had little chance of making money in children’s books.

In early 1998, an auction was held in the United States for the rights to publish the novel, and was won by Scholastic Inc., for US$105,000.

She has donated the proceeds (£17 million) from Fantastic Beasts and Where to Find Them and Quidditch Through the Ages to charity.

She also donated £10 million to the University of Edinburgh to open the Anne Rowling Degenerative Neurology Clinic, in honor of her mum who died of MS.

She wore a disguise when buying her wedding dress as she didn’t want to be recognised!

After Harry Potter she wrote 4 detective novels under a pseudonym ‘Robert Galbraith’.

She is the worlds’ first £1b author, the Harry Potter books have sold more than 500m books.

For more insights on famous people’s careers, check out some of my other posts:

Roald Dahl: A Career in Focus

Pablo Picasso: The Career of a Genius