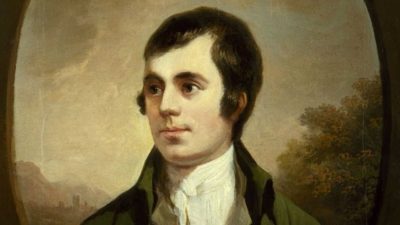 Burns was the son of two farmers and grew up in severe poverty and hardship. The manual labour he did as a child left him with health problems for the rest of his life.

He didn’t really go to school and got much of his education from his father. He taught his kids reading, writing, math, history and geography.

His first child was born to his mothers servant, while he was in a relationship with Jean Armour who was pregnant herself with his twins. This caused Jeans’ family great distress and she was sent to live with her uncle.

At this time Burns fell in love with a woman called Mary Campbell who he dedicated many poems and songs to. She sadly caught typhus from her brother while looking after him and died at the age of 23.

To read about another tragically young death, read my post on the life and career of Wolfgang Mozart

In his mid 20’s, Burns’ farm ran into financial difficulties and he accepted a job offer on a sugar plantation in Jamaica supervising slaves.

As a way of getting enough money to pay for his ticket to the West Indies, a friend suggested to Burns that publish his poems.

In 1786, Poems, Chiefly in the Scottish dialect were published and it’s success was instantaneous. Burns became well known all over Scotland.

In 1787 he moved to Edinburgh, and embarked on a relationship with Agnes McLehose with whom he exchanged passionate letters with. These letters were delivered by Agnes’ maid Jenny Clow who bore Burns a son!

Burns was a big fan of ‘houghmagandy’; consensual sex between parties who aren’t married to each other.

At around this time, Burns contributed several songs to The Scots Musical Museum. He ended up being responsible for approx 200 songs of the entire collection.

Burns worked to collect and preserve old Scottish folk songs. He would adapt, extend or revise them. Many of his most famous poems are newer versions of more traditional songs.

In his later years he alienated many of his friends by expressing sympathy for French and American revolutionaries.

In 1796, Burns died from heart disease. There were many rumours he died from alcohol abuse but these were never verified.

He was only 37 years old. His youngest child Maxwell was born on the day of his funeral.

To read about another famous artist who fathered numerous children by different women, read my post about the life and career of Pablo Picasso

Through his twelve children, Burns has supposedly over 900 living descendants! Three of these were illegitimate, all born to servants.

Burns was not just popular in the UK. His poems were used in their literature by John Steinbeck and J.D. Salinger.

His works were translated into Russian, and he became known as ‘The Peoples’ Poet’ of Russia. In 1956, the Soviet Union commemorated Burns with a stamp. 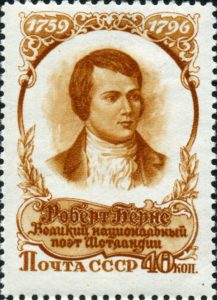 Abraham Lincoln and Bob Dylan are amongst his most famous admirers. Lincoln was said to be able to recite his poems by heart.

Burns Night, in effect a second national day, is celebrated on Burns’s birthday, 25 January, with Burns suppers around the world, and is more widely observed in Scotland than the official national day, St. Andrew’s Day.

In 2009, Scottish TV held a public vote on who was the greatest Scot of all time. Burns narrowly beat other famous Scots William Wallace, and Sir Alexander Fleming to the title.