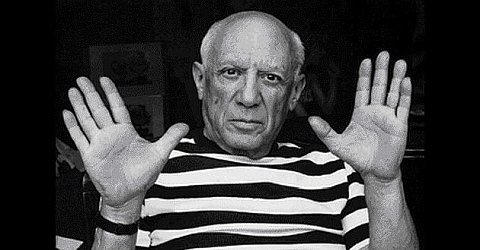 Picasssos’ dad was an Art Professor. He gave his son formal artistic training from the age of 7.

At 13, Picasso Jr finished a sketch of a pigeon that his father had done. His father felt his sons’ skills had surpassed that of his own and vowed to give up painting.

Under the supervision of his father, they would argue frequently.

He was a child prodigy. At the age of 14, he painted ‘Portrait of Aunt Pepa’, a vigorous and dramatic portrait that Juan-Eduardo Cirlot called

At 19, Picasso moved to Paris the then art capital of the world. He shared an apartment with his friend Max Jacob.

These were times of extreme poverty, where he burned much of his work to keep their apartment warm.

Picasso’s work is often categorized into periods. While the names of many of his later periods are debated.

Picasso repainted the faces of two figures in Les Demoiselles d’Avignon after being impressed by African artefacts he saw in 1907.

When he displayed the painting to acquaintances the reaction was shock and revulsion; Matisse angrily dismissed the work as a hoax.

In 1911, Picasso was arrested and questioned about the theft of the Mona Lisa from the Louvre. His friend Guillaume Apollinaire implicated him.

Afraid of a conviction that could result in his deportation to Spain, Picasso denied having ever met Apollinaire. Both were later cleared of any involvement in the painting’s disappearance.

Pablo married married Olga Khokhlova, a ballerina who introduced him to high society and exclusive parties of 1920’s Paris. However the two lived in a constant state of conflict.

Picasso had a secret affair with 17-year-old Marie-Thérèse Walter and separated (but never divorced) from Olga. French law required an even division of property in the case of divorce, and Picasso did not want Khokhlova to have half his wealth.

Marie-Thérèse lived in the vain hope that Picasso would one day marry her, and hanged herself four years after Picasso’s death.

During the war, Picassos’ apartment was often searched by the Nazis.

During one search of his apartment, a German officer saw a photograph of the painting Guernica and asked “Did you do that?” Picasso replied “No, you did”

In his later life, he had affairs with much younger women. Françoise Gilot and Genevieve Laporte were 40 and 44 years younger than him respectively. Gilot was mother to two of his children, Claude and Paloma.

He married his second wife Jacqueline Rogue in 1961. Jacqueline Roque prevented his children Claude and Paloma from attending the funeral.

Jacqueline also didn’t allow Picasso’s grandson, Claude, to go to the funeral over an argument about Picasso’s estate. Crestfallen, Claude drank a bottle of bleach and it took three months for him to die.

Devastated and lonely after the death of Picasso, Jacqueline Roque killed herself by gunshot in 1986 when she was 59 years old

Picasso had many mistresses. They had to be submissive, and had to be shorter than he was – he stood at just 5 feet, 4 inches.

Apparently, Picasso carried a gun with him loaded with blanks and would fire it at people he thought were boring!