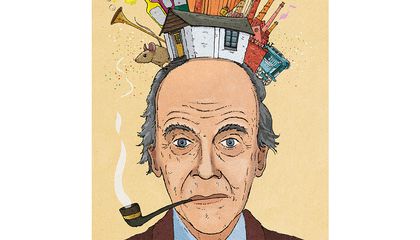 His mother immigrated to the UK and married his father in 1911. Dahl was named after Norwegian polar explorer Roald Amundsen. His first language was Norwegian, which he spoke at home with his parents and his sisters.

Dahl first attended The Cathedral School, Llandaff, Wales, Uk. At age eight, he and four of his friends were caned by the headmaster after putting a dead mouse in a jar of gobstoppers at the local sweet shop, which was owned by a “mean and loathsome” old woman.

He was never seen as a particularly talented writer in his school years. One of his English teachers writing in his school report:

In July 1934 at the age of 18, Dahl joined the Shell Petroleum Company. Following two years of training in the United Kingdom, he was assigned first to Mombasa, Kenya, then to Dar-es-Salaam, Tanganyika (now Tanzania).

August 1939, as the Second World War loomed, the British made plans to round up the hundreds of Germans living in Dar-es-Salaam. Dahl was commissioned as a lieutenant into the King’s African Rifles, commanding a platoon of indigenous Askari men.

Dahl flew missions in Kenya, and the middle east shooting down several German planes until he began to get severe headaches that caused him to black out and he was invalided back to Britain where he was appointed assistant air attaché at the British Embassy in Washington, D.C.

Dahl strongly disliked his new job, feeling he had taken on “a most ungodly unimportant job”. During this time, he met the noted British novelist C. S. Forester, who was also working to aid the British war effort.

Forester worked for the British Ministry of Information and was writing propaganda for the Allied cause, mainly for American consumption

In 2014, the Royal Mint decided not to produce a coin to commemorate the centenary of Dahl’s birth because he was considered to be

“associated with antisemitism and not regarded as an author of the highest reputation“.

the 1986 New Years Honours List, Dahl was offered an appointment to Officer of the Order of the British Empire (OBE), but turned it down. He reportedly wanted a knighthood so that his wife would be Lady Dahl.

His first children’s book was ‘The Gremlins’, published in 1943, about mischievous little creatures that were part of Royal Air Force folklore. The RAF pilots blamed the gremlins for all the problems with the aircraft.

One of his more famous adult stories, “The Smoker”, also known as “Man from the South”, was filmed twice as both 1960 and 1985 episodes of Alfred Hitchcock Presents, and also adapted into Quentin Tarantino’s segment of the 1995 film Four Rooms.

One of his short stories are supposed to be extracts from the diary of his (fictional) Uncle Oswald, a rich gentleman whose sexual exploits form the subject of these stories.

In his novel My Uncle Oswald, the uncle engages a temptress to temptress to seduce 20th century geniuses and royalty with a love potion secretly added to chocolate truffles made by Dahl’s favourite chocolate shop, Prestat of Piccadilly, London

Dahl was also famous for his inventive, playful use of language, which was a key element to his writing.

For a brief period in the 1960s, Dahl wrote screenplays. Two, the James Bond film You Only Live Twice and Chitty Chitty Bang Bang, were adaptations of novels by Ian Fleming

Dahl later disowned the film, saying he was “disappointed” because “he thought it placed too much emphasis on Willy Wonka and not enough on Charlie”. He was also “infuriated” by the deviations in the plot devised by David Seltzer in his draft of the screenplay. This resulted in his refusal for any more versions of the book to be made in his lifetime, as well as an adaptation for the sequel Charlie and the Great Glass Elevator.

According to his granddaughter, the family gave him a “sort of Viking funeral”, buried with his snooker cues, some very good burgundy, chocolates, HB pencils and a power saw. Today, children continue to leave toys and flowers by his grave.